End of the growing season and we have a lot of green tomatoes, so we will jar them. 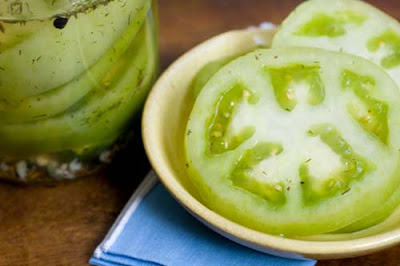 Green tomatoes are simply unripe tomatoes. Now that it’s the end of the tomato season and if you’re stuck with a bunch, I highly recommend these tangy, slightly spicy pickles. They go well on sandwiches, with barbecue, grilled meats, on hot dogs or simply straight out of the jar.

Method:
Evenly distribute the sliced green tomatoes, sliced jalapeños, cumin seeds, peppercorns, celery seed, dill seed and garlic into the jars. In a saucepan, bring to a boil 1 cup of water, the vinegar, and sea salt. Pour the boiling vinegar mixture into the jars leaving a bit of headspace. Cover with lid and fasten with rings. Allow to cool and then refrigerate. They will be ready after 4 hours and will last for 1 month in the refrigerator.

Alternatively, you can place the covered jars in a canning pot or stockpot, cover the jars with water, bring to a boil and then cook on high for 10 minutes. Remove the jars with tongs and then allow to cool. If you are processing this way, make sure that your lids have never been used before, as they will only seal once. These jars will not require refrigeration until after opening.